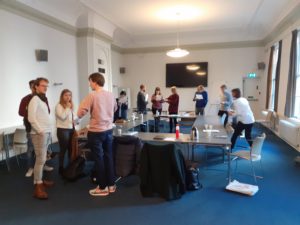 To understand a past society, historians have to unravel the norms that steer human behavior and interaction, but they also have to consider how people defy those norms in their everyday practice. On 20th November 2019, Sheilagh Ogilvie (University of  Cambridge) was invited to follow up a lecture on her new book The European Guilds: an Economic Analysis with a masterclass for PhD candidates and postdocs from three research projects at the Amsterdam School of Historical Studies. (This project, https://www.freedomofthestreets.org/ as well as http://www.inventionoftherefugee.com/).

In The European Guilds, as in so much of  her work, Ogilvie investigated why guilds dominated European markets for centuries, despite systematically causing economic and social harm. For the subject of this masterclass, she chose to focus on the interplay between norm and practice. That interplay often takes center stage in her own analysis, explaining how guilds failed in practice to live up to their admirable stated goals such as providing training, quality control, and innovation.

The masterclass’ participants work on projects ranging from gender relations in urban space to the construction of territory in medieval Brabant, and from Jewish transnational advocacy to conflict management and decision making in Hanseatic cities. When confronted by such a variety of subjects it can be a tricky undertaking to find a common theme for discussion without lapsing into catch-all buzzwords. Norm and practice, however, turned out to be an excellent vantage point from which to discuss these heterogeneous projects, tackle shared obstacles, and broaden our conceptual horizons. Ogilvie did an excellent job at leading and steering the conversation; uncovering unexpected links between each of the research topics.

One of the prime questions tackled was how gender norms shape and restrict access to urban spaces, and what it means if such norms are breached in everyday behavior. If, for instance, washerwomen structurally take in laundry in places where the law forbids it, should we consider it a practice in defiance of a norm, or should we argue that it was the norm to go against this law? In other words, are norms defied by practices or by other, conflicting norms?

These kinds of everyday tensions between norms and practices, parallel those found in the most dramatic of circumstances. During the wars of religion, “humanity” and “inhumanity” developed as normative languages, and were often used to describe the plight of refugees. But although the language was inclusive – “persecution is inhumane” – people used it almost exclusively to describe the suffering of people from their own confession. The norm was inclusive; the practice exclusionary. This shows that while uttered norms have a significant persuasive power, they often reflect poorly what motivates people.

Under Ogilvie’s guidance, the participants found further connections between their work. The challenges of maintaining norms between conflicting groups which were identified in the Wars of Religion reappeared in Hanseatic trading communities of London and Bruges. In that setting, social, legal, and spatial practices strained to preserve norms of cooperation amongst otherwise competitive merchants from cities with conflicting interests. Meanwhile, the spatial norms that shaped the lives of early modern Dutch washerwomen returned to the discussion again in the setting of late medieval Hanse towns, where similar spatial norms sustained the stability, and inequality, that kept those towns’ governments in power.

In drawing out the relevance of the norm-practice distinction for these three very different projects, Ogilvie’s masterclass has shed light on new approaches for its participants, spurred intellectual exchange and collaboration, and perhaps inspired some new practices of its own. 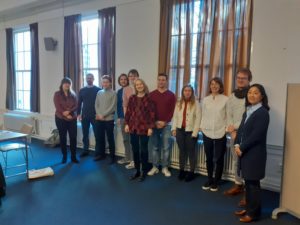 This site is part of Humanities Commons. Explore other sites on this network or register to build your own.
Terms of ServicePrivacy PolicyGuidelines for Participation
Skip to toolbar